skip to main | skip to sidebar

The Green Bride Guide is a comprehensive, easy-to-access resource for anyone interested in planning a green wedding. It provides readers with general advice and specific eco-friendly ideas for making their wedding more beautiful and more sustainable.

The Green Bride Guide emphasizes elegance, ease, individual taste, and the sense that there’s no need to give up a treasured ideal of a wedding in order to lessen its impact on the Earth. Using a simple chronological structure, The Green Bride Guide makes planning a green wedding easy.

Chapter topics include: Engagement, Location, The Eco-Chic Bride, Greening the Groom and Bridal Party, Green Save-the-Dates, Invitations & Wedding Websites, Sustainable Flowers, The Green Ceremony, The Green Reception, Green Gift Giving and Receiving, and Green Honeymoons. Each section offers low, medium and high end ideas, with resources and web links in each category to help you plan a green wedding on any budget. the Green Bride Guide is an invaluable reference tool for any environmentally conscious pair looking to start their lives together in a way that is consistent with their values and beliefs.

Available in December 2008. Until then, visit http://www.thegreenbrideguide.com/

Happily Ever After Begins at the Bora Bora Lagoon Resort 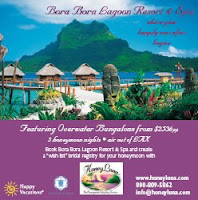 A special package has been created by Happy Vacations, HoneyLuna and the Bora Bora Lagoon Resort... just for your honeymoon.

The package features 5 honeymoon nights in

air out of LAX

Rates and availability subject to changed based on availabilty, dates of travel, departure airport.

Beat the Crowds ~ a great honeymoon experience outdoors at our national parks....

At every national park there's a window of time that's perfect for experiencing the best of the great outdoors--because you go to see nature, not thousands of other tourists.


January/February As wonderful as Yosemite and Yellowstone are in summer, the peaceful outdoorsy vibe can be spoiled by having to elbow for space to snap a photo of El Capitan or line up 10 deep at Old Faithful. The premier parks are far less crowded--and arguably more beautiful--in the heart of winter. Snow drapes the mountains, meadows, and every last tree branch, and things are never quieter or more pristine.


But for an off-peak time, there is surprisingly a lot going on. During four weeks in January and February, Yosemite hosts the annual Chefs' Holidays, when the men and women in charge of some of the best restaurants in the country give cooking demonstrations and host five-course dinners during three-day sessions. All events take place in the Ahwahnee, a granite lodge built in 1927, now a National Historical Landmark. Chef presentations are held in the hotel's appropriately named Great Lounge, among its 24-foot-high ceilings, wrought-iron chandeliers, and enormous windows topped in stained glass. Jesse Cool, chef and proprietor of the Bay Area's Flea Street Cafe, has been participating in the event for nearly two decades. "Winter is my favorite season at Yosemite," says Cool, who will be serving braised pork and other "wintery" foods at the upcoming session. "The setting is just gorgeous, especially when it snows." The chef demos and tours of the Ahwahnee kitchen are free. Paired with top wines from California and elsewhere, the dinner costs $155 per person. (Packages that include lodging and the dinner are available--and often a better deal.)

Beyond Toasters and Towels: Gifts that Go the Distance

She has household effects - he also has enough - so instead of traditional wedding presents, they opt to commeorate their union with travel.

With five wedding parties coast to coast and another in Irael to celebrate their vows, which they took at San Francisco City Hall in December, Jeff Saperstein and Ilene Serlin decided that HoneyLuna, an online honeymoon registry service, would be the perfect gift solution for their many guests.

"We are at a stage in life where we don't need extra household presents", Saperstein told The Ark. "Our friends and family feel inolved by contributing financially to our honeymoon".

The middle-aged Tiburon couple eschewed conventional regiestries so they could fulfill their dream of cruising around Tahiti this fall aboard the MS Paul Gauguin of the Regent cruise line.

HoneyLuna facilitated this fantasy by creating a web-based template, which summarized the possible activities Saperstein and Serlin could enjoy on their honeymoon, said Nancy Williams, founder of the Sausalito-based company. Guests simply log on and select such options as a bottle of champagne, spa treatements, snorkeling packages, a dinner for two, language classes, taxi fares and cruise or airfare payments.

HoneyLuna holds the funds in an excrow account and disburses them when the couple is ready either to pay for their honeymoon arrangements or take cash contributions for designated activities. HoneyLuna adds a 9% surcharge for each gfit, but the registry is free for the couple.

HoneyLuna sends a gift card with a personal greeting from teh giver to the nelyweds, who often acknowledge the gift by sending a photograph of themselves engaged in the activity they received as a gift.

"We have linked the customized HoneyLuna registry to our wedding website", Saperstein said. "Using technology to communicate with friends and family during the busy time is very contemporary".

Saperstein and Serlin typify the trend of later and second marriages. One-third of those getting married today have been married previously, according to Richard Markel, director of the Association of Wedding Professionals International. This is Saperstein's second visit to the altar and Serlin's first.

"Interest is rising for honymoon registries because many couples already possess household items", Markel told the Ark. "Young American couples are waiting longer to get married, as the average age of the first -time bride is 27 and the first time groom is 29:.

Williams and her husband launched HoneyLuna, one of the first honeymoon registries, in 1995 when they came home from their six-week, multi-ciy European honeymoon. "I realized that there was an opportunity in the second-marriage market, and that if young couples are given an alternative, many would rather have a fun honeymoon versus traditional wedding gifts". A couple planning a honeymoon can view more than 450 worldwide destination templates on the HoneyLuna site.

Markel said that 99% of wedded couples embark on a honeymoon - a symbol of a new life together and often their first big trip.

Since the average wedding budget is estimated at $20,000, it can be a relief for a couple when they receive gift contributions toward their honeymoon because the savings can add up to an average of $3800. Some couples have multiple registries and travel may be one choice. Much is dependent on the size of the guest list.

"The main reason we worked with HoneyLuna is because so many people wanted to give us a gift", Pamela Barientos, another customer, told the Ark. "Between my husband and me, we had two homes full of belongings. Yet, with a 200 guest party, we ran out of funds, so the honeymoon registry was very appreciated.

Barientos, 50, and Mark Meges, 47 of San Rafael, sent guests a thank you note with a photo taken during their September honeymoon in the Greek Isles.

The bride said their guests were enthusiastic because they did not have to shop or wrap a gfit. Even her little nieces were able to afford economical items on their honeymoon wish list.

"The Internet has made the world a smaller place,", said Markel, the wedding industry expert. "A couple does not have to be rich or famous to visit exotic destinations."

Here is a great article from the New York Times about getting away from the masses of fellow travelers and finding alternatives to the shore excursions provided by the cruise lines...

AFTER standing in line for the buffet, staking out a lounge chair on the sun deck and squeezing into the hot tub with total strangers, you might be forgiven for dreading the cruise excursion, which typically involves hundreds of passengers piling into little boats to go ashore, queuing up for a bus to take you to the standard tourist sites and straining to hear the guide rattle off some rote facts. Click here to read the rest of the article....

BOOK YOUR HONEYMOON OR VACATION PACKAGE

Click the image to book your dream vacation in paradise.

TheLunaLine - Shop Before You Go!

Everything you need to wear (and more!) while you are there!

Other Links and Blogs We Love

CNN's Budget Travel editor Erik Torkells has tips on actually registering for your honeymoon.
CLICK HERE TO WATCH THE STORY

Subscribe to HoneyLuna's honeymoon registry and travel blog by Email